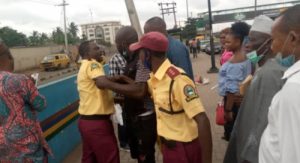 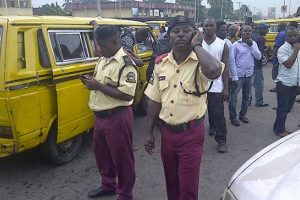 Operatives of the Enforcement Unit of Lagos State Traffic Management Authority, LASTMA have impounded vehicles of 20 motorists, fining them N100,000 each for operating illegally around Apongbon and Ikorodu areas.

This was disclosed on Sunday, by the Head, Enforcement Unit, LASTMA, Mr. Odunuga Olukayode, who said the Authority impounded 20 commercial vehicles on Apongbon Bridge and Ikorodu Roundabouts over the weekend.

Mr. Odunuga, while speaking about the operation, said the drivers of the 20 impounded vehicles were also arrested and charged to a Mobile Court which fined them N100,000 each after they all pleaded guilty.

THECONSCIENCEng gathered that the vehicles were made up of painted and unpainted cars and buses used for commercial operations in the areas.

Adebayo Taofeek, the Director, Public Affairs Unit of the Authority, said the operation took place over the weekend, in order to ensure free flow of traffic and a total clampdown on commercial buses operating illegal garages/parks on bridges and roundabouts across the State.

Similarly, LASTMA General Manager, Mr. Bolaji Oreagba, while speaking on the enforcement exercise, said the illegal activities of the owners of the commercial buses/cars on bridges and roundabouts across the state contravene the Lagos State Transport Sector Reform Law of 2018.

He stated further that it was nauseating seeing these commercial bus drivers constituting public nuisances by operating illegally on Bridges and Roundabouts thereby causing avoidable traffic gridlock and inconveniencing other motorists and road users.

The LASTMA boss revealed that the Enforcement Unit of the Authority had to embark on the exercise at Apongbon Bridge and Ikorodu Roundabouts after the recalcitrant drivers who do not want to operate within government-designated garages and parks across the State failed to comply with several warnings issued to them.

He noted that the Authority would not rest on his oars on curbing illegal activities of the unruly commercial buses/cars operators as the present administration is expending huge resources on constructing standard Bus Terminals in every part of the State.

“We would continue to ensure free flow of traffic movement around Bridges and Roundabouts across the State by scaling up our enforcement and clampdown operations on these stubborn commercial buses operating illegal parks, garages and car mart in the State”, Oreagba declared.

Mr. Odunuga stated that the Agency is committed to clamping down on the nefarious activities of disobedient commercial vehicle operators until zero tolerance on illegal garages and parks is achieved across the State.