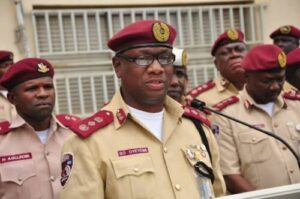 The Sector Commander of the Federal Road Safety Corps, FRSC, in Abia State, Mr. Paul Ugwu, has denied claims of shielding an official who allegedly killed a driver at a checkpoint at Umuikaa junction along the Enugu – Port Harcourt expressway, in Isiala Ngwa South council area.

THECONSCIENCEng gathered that the yet-to-be identified official of the FRSC had on August 16, 2022, allegedly stabbed a bus driver to death.

Eyewitnesses said the driver refused to part with money which led to a confrontation with the FRSC official who stabbed him to death.

The situation caused tension in the area as angry youths who heard the news of the driver’s death stormed the FRSC office in the area and set it ablaze.

But, there are reports that the FRSC sector commander has been shielding the killer officer and those who were on duty on the day of the incident.

There were reports that alleged that there is a secret plot by the FRSC to transfer the killer officer out of Abia state without prosecution.

“It is shocking that after almost two weeks, the FRSC has not exposed those who killed the bus driver.

“If we keep quiet, this will continue. We cannot continue to watch people killed recklessly on our highways. It’s not the first at the same Umuikaa. Last two months,a security agent shot dead another bus driver because of a false alarm raised by FRSC officers at Umuikaa junction.

“We’re hearing now that they’ve concluded plans to transfer the suspects out of Abia. This has happened before with other security agencies. We don’t want another one to happen.”

Contacted on the allegations, the Sector Commander, FRSC, Abia State, Paul Ugwu disclosed that all the FRSC officials who were on duty on the day of the incident were arrested and under detention by the police.

His words; “Those who were on patrol on the day of the incident have been arrested and are still with the police for one week now. And the Police is still carrying on with the investigation. So, I wouldn’t know where the person making the allegation is coming from,” Ugwu said.

The Commander further stated that the Police have not submitted the report of their investigation and is yet to tell the FRSC that they have concluded the investigation.

“That allegation that nothing has happened about the case is not correct information. The person who made the allegation should have gone to the police to know whether those people have been arrested or they are in their houses.”

Ugwu added that the FRSC in Abia is still investigating which has nothing to do with the one the police are doing, stressing that by the time the police submit their report, the FRSC would have been able to conclude and submit to the appropriate authorities in the headquarters in Abuja.