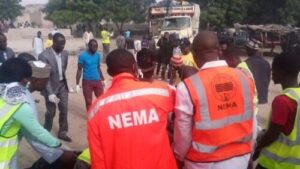 THECONSCIENCEng gathered from Ibrahim Farinloye, Zonal Coordinator, South West NEMA, who confirmed the incident to Newsmen on Monday in Lagos.

Farinloye said that a tank scaffolding of a two-storey  building collapsed on a bungalow in the next compound, resulting in the death of two males- an adult and a child, while three adult males sustained injuries.

He said that the injured were taken to the hospital by community leaders in Bariga before the arrival of emergency responders.

The NEMA Coordinator said that the incident occurred at Adeleye Street, Ladi Lak, Bariga, a suburb of Lagos.