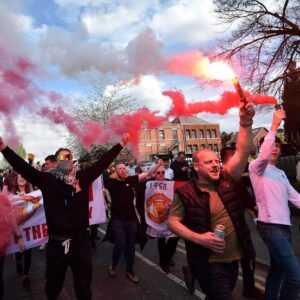 Manchester United supporters have planned a huge protest against the Glazer family’s ownership of the club ahead of their second home match of the season against Liverpool.

The revolt comes as a result of 17 years of mismanagement, taking money out of the club, almost non-existent communication between owners and fans and ultimately, poor sporting performances.

Today’s protest won’t be the first time the club’s supporters have spoken out against the owners, and judging by activity, it won’t be their last either.

The Glazer family bought their first shares in the club in 2003, purchasing a 2.3 per cent stake after Manchester United’s board had begun a search for new investment.

By the end of 2003, the Glazers had increased their stake to 15% and they started to explore a takeover bid, much to the dismay of the supporters.

Step by step, the Glazers increased their stake and they had almost reached the 30% required for an official takeover bid by October 2004.

In May 2005, the Glazers bought J.P McManus and John Magnier’s 28.7% stake to take their overall investment to a controlling stake of 57%.

Within a month, the Glazers (brothers Joel and Avram) had reached the 97.6% threshold forcing a compulsory buyout of all the remaining Man Utd shareholders.

They were thus officially the owners of Manchester United at a valuation of £790 million. 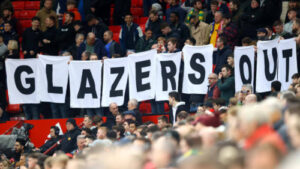 By the end of 2003, the Glazers had increased their stake to 15% and they started to explore a takeover bid, much to the dismay of the supporters.

The Glazers’ takeover was immediately met by anger and mass protests from Manchester United supporters.

Supporters were furious that the American family purchased Manchester United via a leveraged buyout which was funded by loans – many of which were secured against the club’s assets.

The loans came to a total of £660m and were provided by three American hedge funds. This thrust Manchester United into debt for the first time in over 70 years.

These debts were then to be paid off from future profits, with interest payments of over €60 million a year.

The Glazers were painted by fans as money and power-hungry leeches who only cared about lining their own pockets.

Reports also say that the Glazers even took out money during the Coronavirus pandemic – costing the club over €100m in revenue.

Things at Old Trafford  haven’t got much better this season, as they signed a new manager in Erik ten Hag, but have refused to show a clear change in strategy, and that has reflected in the team’s performances.

A protest against Liverpool won’t be the first – they did the same ahead of the same match in 2021, after Manchester United signed up for the failed European Super League, and that got the game postponed.

The United supporters plan to protest on Monday by not attending the match, which is seen as their biggest of the season.