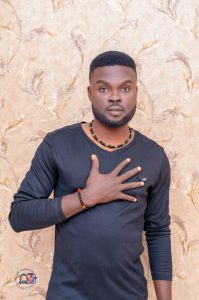 Popular amongst his long following and still growing fan base as Vee Geneziz, his real name is Ayoola Oladokun, an origin of Oyo State.
He is a graduate of Animal Science from the Federal University of Agriculture Abeokuta (FUNAAB) and attended Saint Francis Catholic college, Oyo state.

VeeGeneziz started making music as early as 2008, he recorded tracks like ‘Judileke’, ‘Man no be God’ and a pack of others. However he had to put his budding career on hold due to family beliefs and pressures.

After years of hiatus, VeeGeneziz is back with a currently trending lovers’ anthem titled “You” which was produced and mixed by Chambalin (VybzKilla). The hit which was actually composed in 2004, is unbelievably still popular amongst his long following and still growing fan base.

Presently available on Audiomack and NaijaLoaded as well as other music platform, He is dedicating “You” to people who believe in the power of love, those celebrating love, those craving love and those scared of falling in love again.

The melodious and easy to sing along track “You” is now the Dj’s number one choice at weddings,birthdays and many other occasions which has made many believe that in no time the name Veegeneziz would have become a household name in the Nigerian Music industry