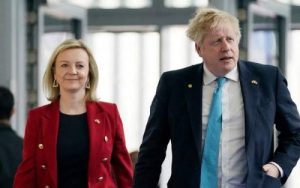 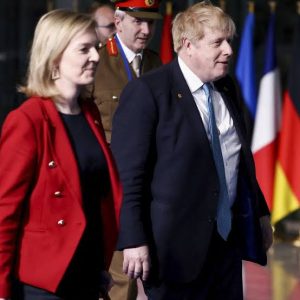 Outgoing UK prime minister, Boris Johnson on Tuesday promised total support for his successor Liz Truss, as he left Downing Street for the final time as British prime minister to tender his resignation.

Recall that Johnson’s tenure was marred by Brexit and Covid and cut short by scandal, he bid farewell to cheers and applause from supporters before heading for an audience with Queen Elizabeth II.

In a typical rhetorical flourish, he likened himself to “one of those booster rockets that has fulfilled its function” and would splash down “in a remote and obscure corner of the Pacific”.

But he promised: “I will be supporting Liz Truss and the new government every step of the way.”

And he urged his ruling Conservative party to put aside their differences to tackle the energy crisis that looks set to dominate Truss’s immediate future.

“If Dilyn (his dog) and Larry (the Downing Street cat) can put behind them their occasional difficulties then so can the Conservative party,” he added.

The handover of power in Britain is normally a swift affair, with the outgoing and incoming leaders making a short trip to Buckingham Palace in central London in quick succession.

But both Johnson and Truss face a 1,000-mile (1,600-kilometre) round trip to the head of state’s remote Balmoral retreat in the Scottish Highlands.

The queen opted not to return from her annual summer break for the brief ceremonial audience, after persistent health issues that have affected her ability to walk and stand.

At the meeting, which should last about 30 minutes, she will ask Truss, as the leader of the largest party in parliament, to form a government.

Liz Truss, 47, was announced winner of an internal vote of Conservative party members on Monday, after a gruelling contest that began in July that saw her defeat several other rivals.