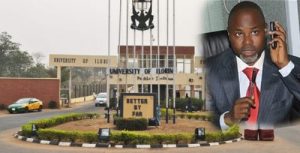 A Senior Advocate of Nigeria, (SAN) and Professor of International Law and Jurisprudence, Wahab Egbewole has been appointed as the new vice chancellor of the University of Ilorin (UNILORIN).

THECONSCIENCEng reports that the Governing Council of the institution announced Egbewole’s emergence after four days of screening conducted for 13 aspirants.

Egbewole was announced as the new vice chancellor by the Governing Council at a press briefing held at the Council chamber of the University on Thursday, September 7 2022 by the Chairman of the University governing council, Mallam Abidu Yazid.

Egbewole becomes the 12th Vice Chancellor of the University of Ilorin and will take over from Professor Sulyman Abdulkareem whose tenure will expire on the 15th of October 2022.

Mallam Yazid said that Egbewole emerged after a rigorous screening of 13 professors by the council in the last four days.

In 2021, the University was ranked among the top three universities in Nigeria, by AD Scientific Index, a leading global ranking body based in Turkey in a listing of 2021 “World Scientists and University Rankings”