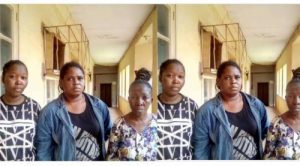 The Enugu State Police Command has arraigned before the court three women for an alleged conspiracy, trafficking of newborn twins and the killing of their mother.

THECONSCIENCEng gathered through a statement on Friday by the command’s spokesman Daniel Ndukwe, that the suspects; Ukorie Cynthia (25), Onyia Pauline (56) and Aroh Ijeoma (39) were remanded in the Enugu Maximum Correctional Centre on Friday.

The statement stated that the trio were first arrested by operatives of the command attached to the Central Police Station Enugu July 26, 2022 following complaints that the suspects had conspired and sold newborn twins of one 31-year-old Chinenye Odoh.

According to the statement, the case has been adjourned to October 5, 2022 for trial.