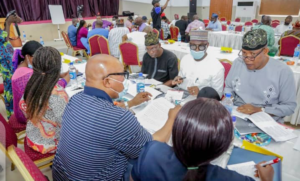 The Senate, through its Committee on Finance, on Tuesday disagreed with the Minister of Finance, Budget and National Planning,  Zainab Ahmed, as well as heads of revenue generating agencies in the country on the proposed  2023 – 2025   Medium Term Expenditure Framework (and Fiscal Strategy Paper.

THECONSCIENCEng reports that the finance minister at the interactive session informed the committee that the proposed N19.76tn budget for 2023 would have a deficit of N12.43trillion as a result of projected N6tn tax and import duty waivers as well as fuel subsidy of over N6tn if retained for the whole year.

Worried by the submission,  the Committee Chairman, Olamilekan Adeola, told the minister that both the projected N12.43tn budget deficit and N6tn tax and import duty waivers should be critically reviewed downwards before sending the proposals to the National Assembly for consideration and approval.

Adeola told the minister to look into the list of beneficiaries of the waivers for required downward review to N3tn, with attendant reduction of N12.43trillion deficit figure.

“ The proposed N12.43trillion deficit for the 2023 budget and N6trillion waivers are very disturbing and must be critically reviewed.  Many of the beneficiaries of the waivers are not plowing accrued gains made into expected projects as far as infrastructural developments are concerned.

“The Nigeria Customs Service should help in this direction by critically reviewing waivers being granted on import duties for some importers just as the FIRS should also review the tax credit window offered to some companies without corresponding corporate social services to Nigerians in terms of expected project executions like road construction.”