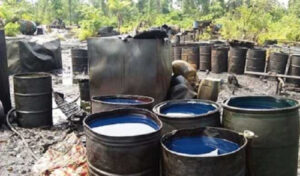 Nigeria lost a huge amount of revenue as a result of massive oil theft between January and August this year,THECONSCIENCEng reports.

According to the Nigeria Upstream and Downstream Petroleum Regulatory Commission’s monthly reports, Nigeria lost about 13.21 million barrels of crude oil with an estimated worth of N603.64bn between January and August this year, an analysis of the monthly reports of the country’s crude oil and condensate production showed.

Figures contained in the reports, obtained from the Nigeria Upstream and Downstream Petroleum Regulatory Commission in Abuja on Sunday, indicated that the country’s oil production only increased in two months, but crashed in others. The losses continued in May after oil production crashed to 31.76 million barrels, representing a loss of 4.82 million barrels when compared to what was produced the preceding month.

For the prices of oil during same eight-month period, data from countryeconomy.com, an international analytical firm, showed that the average monthly costs of Brent, the global benchmark for crude, was $86.51/barrel in January, $97.13/barrel in February and $117.25/barrel in March 2022.

The crash in Nigeria’s oil production has been attributed to the massive oil theft in the Niger Delta, which has been greeted by widespread condemnations and protests by oil workers.

The National Public Relations Officer, Independent Petroleum Marketers Association of Nigeria, Chief Ukadike Chinedu, told our correspondent that though there might be some inconsistencies in oil theft data, the volume of crude stolen from the country was huge.

He said, “On the quantity of oil being stolen from Nigeria, the various figures you see are all estimated figures. There is no accurate gauge to measure the volumes of crude oil being stolen in this country because we don’t have a standard measuring system.

“But because of the recent incident of a vessel that was intercepted for allegedly trying to steal crude oil from Nigeria, we think that a measurable quantity of our crude oil is not accounted for.”

He added, “I also know that Nigeria is losing a lot of revenue from this oil theft and stakeholders are not happy with the way the cartel who are involved are handling the matter.

“It is therefore pertinent that the Federal Government should come out with a standard measuring instrument that will give the exact number of daily production, export consumption and the amount being reserved, as well as what we channel for local use.”