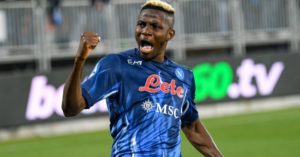 Against rumoured speculations, Manchester United are unlikely to succeed in their efforts to bring Nigerian striker Victor Osimhen to Old Trafford, according to transfer expert Fabrizio Romano.

THECONSCIENCEng reports that fresh from bolstering his attacking options after an £81.3m agreement was reached with Ajax for the arrival of winger Antony, Red Devils boss Erik ten Hag is still in the market to secure more deals ahead of Thursday’s (today) 11pm deadline.

According to Sky Sports, super agent Jorge Mendes is attempting to broker a deal which would see Osimhen swap Napoli for Manchester United ahead of the deadline.

The report suggests the Portuguese has proposed that the Red Devils will buy the Nigeria international while Cristiano Ronaldo heads in the opposite direction, but the Serie A giants are seeking more than a £100m fee for Osimhen.

Romano believes Osimhen is likely to remain with his current employers in Italy rather than following Antony to Old Trafford. 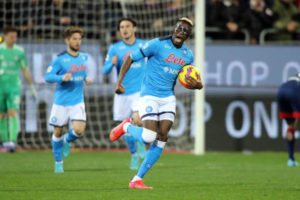 The respected Italian journalist feels the Red Devils will also fail to land Aubameyang ahead of the deadline, with a move to Chelsea more of a possibility.

Romano told GIVEMESPORT, “With Osimhen, there are a lot of rumours but, at the moment, I see him staying at Napoli.

“Also, there are a lot of stories about Aubameyang, but Chelsea are working to sign him as soon as possible.”

Osimhen is only 23, so he is still in the early stages of his career, but he has already found the back of the net 68 times.

That shows how much of a threat the Napoli man poses in the final third of the pitch, and having also enjoyed a productive start to the new season, contributing two goals and an assist in three games, it is clear why Ten Hag is keen to swoop.

United boss, Ten Hag favours strikers who can pose a threat by pressing from front, something Osimhen’s hard work on the pitch sees him do efficiently.