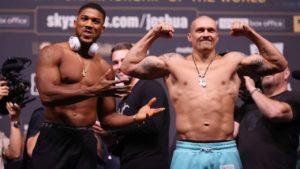 The Ukrainian won via a split decision.

Usyk endured tremendous pressure from Joshua, who delivered a vastly-improved performance from their first fight in September.

The Brit was much improved from their first encounter as he once again took the unbeaten Ukrainian the distance.

Joshua, 32, must now rebuild having suffered his third career defeat, while Usyk, 35, remains unbeaten and will be seeking a unification fight with Tyson Fury, with not too many believing the WBC champion’s recent retirement announcement.

Joshua was absolutely fuming at the end of the match, visibly expressing disbelief at the results.

The Briton had told Usyk, “Skills win boxing, you’re not strong, how did you beat me? I had character!”

However, after storming away from the ring, the 32-year-old returned to the ring to praise the Ukrainian champion, who upended him for the second time.

“Usyk one hell of a fighter, that’s just emotion. Please give him a round of applause as our heavyweight champion of the world. This guy is a phenomenal talent, how many belts you got bro, five? Hip-hip, hooray!” he said.

Usyk dedicated the victory to his home country Ukraine, saying his fight was “already history”.

“I want to thank everyone who prayed for me,” Oleksandr Usyk said. “I want to thank God for the help that he gave me today because he did give me a lot today, my lord is Jesus Christ.

Usyk holds three of the four major heavyweight belts. There is one missing from his collection.

The 35-year-old said he wants to fight Tyson Fury next. Tyson Fury holds the WBC title.

Fury, 34, announced his retirement earlier this month, relinquishing his Ring Title. However, Oleksandr Usyk thinks Fury is not done yet.

As Anthony Joshua made his way back to his dressing room following his loss to Oleksandr Usyk, someone wound him up.

AJ had thrown two of the champion’s belts out of the ring and then delivered a passionate, yet angry rant afterwards.

He had calmed down, though, as he walked back but took exception to a comment by a bystander, who told him to keep it professional.

“What, who you talking to?” Joshua demanded.

He then uttered an expletive his way before being ushered away.