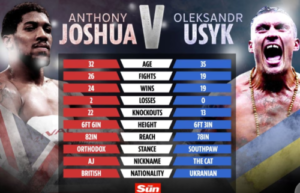 AJ finally gets his shot at the long-awaited rematch after a number of delays. There was a hold-up in negotiations as well as the Russia-Ukraine war which Usyk fought in.

But the pair will go head-to-head again this weekend. The main fight will feature Joshua vs Usyk 2 – for WBA (Super), IBF, WBO, IBO and Ring Magazine heavyweight titles (12 rounds)

The Joshua vs Usyk 2 fight is being billed as ‘The Rage on the Red Sea’ and is on Saturday, August 20. It will be held in the indoor arena at the King Abdullah Sports City in Jeddah, Saudi Arabia.

Ring walks are expected around 10.30pm with promoters Matchroom confirming the estimated main event start time is10:54pm in the UK, which is gone midnight local time.

Joshua had lost all of his belts to the classy Ukrainian at the Tottenham Hotspur Stadium in London last year, and he wants them back.

Oleksandr Usyk said: “In the first month of the war I lost 10 pounds.

“But when I started preparing for this fight I quickly gained the weight and my team put in all this incredible work to strengthen my body. 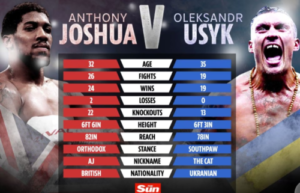 “I don’t want to say a lot about the weight but the main thing is I feel incredibly fit and strong. You can see it in the gym but I am really going to prove this in the ring.”

Joshua looks to avoid defeat this time around, and appeared to have switched things up after making a change to his coaching team, joining with Mexican Robert Garcia ahead of the fight.

But two of the great heavyweights of all-time, Mike Tyson and Tyson Fury said they were unsure if there’s anything Joshua can do to win, with both predicting Usyk to be too fast for AJ for the Joshua vs Usyk 2 battle.

Last time out, in September 2021, there was over a stone of difference between the pair with AJ weighing in at 17st 2bs to Usyk’s 15st 8lbs. But this time Usyk could weigh over 16st.

According to trainer Dave Coldwell, who coached Tony Bellew against the heavyweight champion, this is the wrong approach to take.

Coldwell said: “From an Usyk point of view, I get that he is going to be more aggressive and look to land bigger shots but with his mobility and speed being his two greatest assets they will take a hit.

Oleksandr Usyk surprises everyone with weight for Anthony Joshua rematch. He has piled on the pounds to defend his titles in the Joshua vs Usyk 2 rematch.