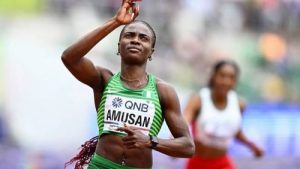 The 25 year old finished ahead of Tia Jones (12.40secs) who placed second and Brittany Anderson in third with a time of 12.42secs.

Her time was the second fastest legal time ever over the hurdles after the 12.12secs world record she posted in July at the World Championships in Oregon, USA.

In a video posted on Twitter by the World Athletics, Amusan said, “Everyone has doubted me. I just had to prove myself, that I have got it. I am just so thankful for all of this season. I am full of emotions. Now, vacation, rest, and then back to practice.

“I was scared to the teeth getting on that line, but you know, I just had to keep my calm… then yes, its show time! I’m just thankful to have come out here and get the win.”

She said that there was no pressure, that she just felt the need to prove to herself that breaking the World record in Oregon wasn’t a fluke. 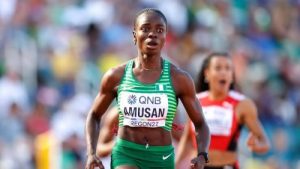 “There is no pressure; it was more of proving to myself that I broke the World record and I can do it over and over, it’s not just a one-time thing.

“Even though after the World Championships, it took a toll on me to get back into my rhythm, but with enough rest, I was able to bounce back, and I’m thankful.”

Amusan’s feat in Lusanne has seen her successfully defended four titles this year.

She had kicked-off the year by retaining her African Championships title in Mauritius back in June, before traveling to Paris to smash her 12.42secs African record with a time of 12.41secs at the Diamond League meeting in Paris.

Then she ran 12.41secs at the Diamond League meeting in Paris, before storming Benin City, Edo State to erase the 12.63secs Nigerian Championships record set in 1997 by Angela Atede in Lagos.

The reigning African champion ran 12.58secs to add the championships record to her collections, before going to the biggest stage in world athletics to achieve legendary status.

The Utep graduate also produced one of the biggest surprises of the World Championships when she sped to a world record of 12.12secs in the semi-finals of the 100m hurdles, following it with a wind-assisted 12.06secs in the final to win gold.

She went on to win the Commonwealth Games title with a Games record 12.30secs and in the process became the first Nigerian track and field athlete to successfully defend an individual title at the Games.