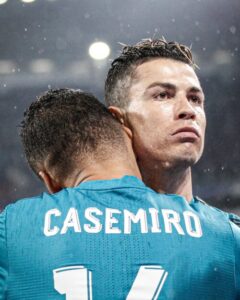 As speculations of possible move away from the Bernabeu for Brazilian midfielder; Casemiro, continue to grow, Coach Carlo Ancellotti has confirmed the move will see the daylight.

Ancellotti while responding to questions about Casemiro’s future disclosed during an interview with media stating that the midfielder wanted to try out a new league. 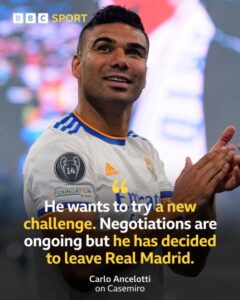 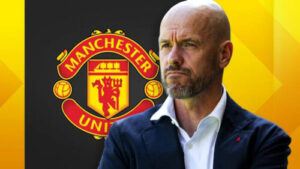 He said “Casemiro wants to try a new challenge, negotiations are ongoing but he has decided to leave the club.”

English football club, Manchester United are reportedly closing up on five new signings before the summer transfers with Casemiro listed as main priority.

Transfer deals in the Premier League will close on Thursday, September 1, after a close to the three-month activity of transfer business.

United have reportedly drawn up a five-man shortlist of players they want to sign before the window closes.

Casemiro has not hidden his intentions and wish to join United, saying in a recent interview that he has good friends at the club whom he has reached out to concerning a possible move.

The midfielder is set to earn €18m ($18.1m) a year with the Red Devils, according to Nicolo Schira.

Despite seemingly being around for decades, he only turned 30 in February 2022.

The Brazilian made his senior debut at the age of 18 and has enjoyed a relatively injury-free career.

Last season, the 30-year-old played 48 games in all competitions for Real Madrid as they won La Liga and the Champions League.