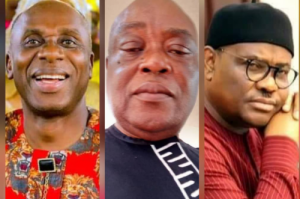 A statement credited to Governor Nyesom Wike of Rivers State while commissioning the Ogbunuabali Sandfilled Area in Port Harcourt has drawn flaks from an APC Chieftain, Chief Eze Chukwuemeka Eze.

Nyesom Wike was said to have boasted that he and his team have a huge task of bringing down the structure of the All Progressives Congress (APC) in Rivers state.

He had also allegedly added that he had been busy destroying APC structures in the oil-rich state whereas some of the party members of the Peoples Democratic Party (PDP) are on the other hand distracting him.

Eze, who was also a former National Publicity Secretary of the defunct New People’s Democratic Party (nPDP) said it was laughable to see the Nyesom Wike deploy very flamboyant claims as a gimmick to sway Presidential candidates and political lobbyists to continue to see him afloat the waters of political relevance ahead of 2023 elections.

He added that it beats one’s imagination to comprehend the parameter used by Governor Nyesom Wike that gave him the deceptive conclusion and false impression that he was either destroying or capable of destroying the APC Structure in Rivers State.

In a statement made available to THECONSCIENCEng, Eze noted that “it amounted to gross disappointment for Governor Nyesom Wike  to bank on the emptiness of the irrelevant and politically worthless former APC members whom he bought over to his side after they were swayed by his cash gifts running into millions of Naira, to destroy the Rivers APC, noting that the departure of those former APC members has very little or no negative impact on the stability of the party in the state.”

He said the fact that the Governor used some political jobbers who marauded as party men to scuttle the chances of APC in the elections of 2015 and 2019 should not give him courage to think that same regrettable mistakes will ever be allowed to happen in 2023.

Those who left the APC are moles planted by Wike and what happened was simply that he took them back to his fold formally to show them appreciation for constituting themselves as nuisance to the progress of the party in the State and that does not qualify as defection because they were not part of the progressives in the first instance.

“Are you counting that these elements rejoining you in order to receive their pay for aiding you to continue to ruin the economy and future of Rivers State is what gives you the impression that you are destroying the APC Structure? If the answer is in the affirmative, then your stand becomes laughable as it doesn’t in any way portray that APC in Rivers State have been decimated.”

By retrieving some of these elements who have by their actions lost political relevance so far politics is concerned in Rivers State you have only succeeded in making the Rivers State APC Structure stronger and well positioned to send you and your funny Group out from the Brick House and salvage the State from her present sorry State.

It is regrettable that God gave you a unique privilege to write your name in gold but see what you have done to yourself instead of being a Governor you turned yourself a laughing stock, an Entertainer and Nigeria Best Government Comedian. I don’t know if the elders amongst those that you entertain find time to counsel you on your rating in the eyes of the world.

Today instead of improving on what your predecessors have achieved for the State you only succeeded in taking the State many years aback in her drive to join other developed economies.

What Wike has failed to understand is that “Everybody leaves the ATM once it stops dispensing cash”. Once you are no longer in position to misuse Rivers State funds in currying favour and buying those that are purchasable, you will find out if truly those that are taking selfie with you are truly in love with your style of governance. It is matter of few months and your eyes will be clear.”

“I can now understand what one of the big fishes you feel that you have captured told me, “Eze, what Gov. Nyesom Wike is dishing out to the public uncontrollably is Rivers State money and we are sons and daughters of Rivers State and entitled to those funds so if it means taking selfie with Nyesom Wike to get our own portion of the fund then we will join him until such a time it becomes imperative for us to collectively join hands together to salvage the State” If this is the stand of most of these political Actors we will send more of them to you.”

On the other hand, Eze wished to know which political party the Governor Nyesom Wike was dumping these political commodities he has been purchasing from APC. “Is it PDP that is no longer existing in Rivers State where the key strongholds have deserted the party. Or is Wike unaware that Senator Lee Maeba, Sir Celestine Omehia, Rt. Hon. Austin Opara, Prince Uche Secondus, Senator George Thompson Sekibo, Dr Abiye Sekibo former Minister of Transportation, Hon. Chinyere Igweh including his former boss Rt. Hon. Chibuike Rotimi Amaechi have all deserted him so why plotting to crumble APC when he has failed to strengthen or keep his crumbling party structure intact and cohesive.”

Eze counseled Gov Nyesom Wike to continue to deceive the general public as if he was the sole determinant of how Rivers State and her people will vote in the 2023 general elections as in the next few weeks Nigerians will come to know that the so called PDP in Rivers State was just an empty structure without any sound political leader.