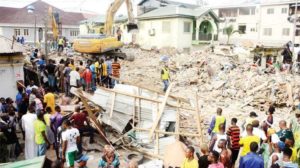 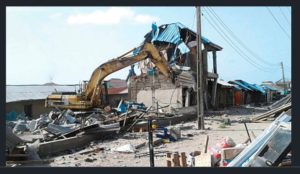 Stakeholders in the Lagos State building  industry on Friday gathered to provide   solutions to the incessant menace of building collapse in the state.

THECONSCIENCEng reports that the round table discussion was organised by the Lagos Building and Control Agency, and had in attendance professionals across the length and breadth of the Lagos built industry including architects, builders, surveyors, town planners, engineers, among others.

The newly appointed Commissioner for Physical Planning and Urban Development, Omotayo Bamgbose-Martins, while addressing the gathering, said the ministry would soon commence comprehensive reforms to curb the spate of building collapse in the state.

He urged industry players to desist from shoddy and unethical practices and always maintain the highest construction standards.

“There has to be attitudinal change in order to stop the collapse of buildings. This deployment is an assignment for me,” Bamgbose-Martins said, vowing to rid the state of building collapse.

Bamgbose said the state government had adopted a zero tolerance policy against building collapse. He noted that he would not hesitate to wield the big stick on any member of staff of the ministry found culpable of sabotaging the efforts towards tackling the menace of building collapse.

According to the commissioner, serious punitive measures would be meted to developers who were found wanting with regard to deviating from the stipulations of the approved building designs.

In his opening remarks, the General-Manager of the Lagos State Building Control Agency, Gbolahan Oki, urged industry stakeholders to work collectively towards finding lasting solutions to the menace of building collapse in the state.

Oki said the agency would continue its all-out sensitisation campaign in order to drive conversations around compliance to building standards.

He said, The present administration led by Mr Governor Babajide Sanwo-Olu recognises the policy of civil engagement and also the value of collaboration of relevant professional bodies in accomplishing this goal.

“I would like to seize this opportunity to inform all that the agency has concluded its plan to embark on a massive enlightenment and sensitisation programme.”

The General Manager of the Lagos State Materials Testing Laboratory, Tajudeen Afolabi, said the vast majority of construction problems stemmed from negligence on the part of the developers in conducting proper testing.

He stressed that any material used for the purpose of construction must be subjected to rigorous testing, noting that the state government had spelled out stringent punitive measures against erring practitioners.